↓
Hi Sharon,
I just wanted to touch base with you, check in, and say hello
from British Columbia! Manny’s third Birthday is coming up
February 6th 2013…I cant believe its been 3 years since I
first met this rascal! Time has just flown by! Though our
initial time together was more of an adjustment period for me,
our bond with manny was immediate, and I am certain that at this
point in time he tolerates me more than I him. Manny has fast
become a spoke in my family hub and sometimes I wonder whether
my family and friends prefer his company over mine!!! LOL People
are intrigued by him, as he is somewhat of a rare(r)
canine…this coupled with his sweet and affectionate demeanor
make him a hit with any crowd! I hate to say this, but
truly…if i had of known how much interest people would express
over him when he’s spotted around town I would have chosen
another breed! Many a conversation have had to be had when yours
truly is short on time and out for a brisk walk! HAHAHA! I have
ran into a handful of bloodhound owners the past few years and
ALL of them marvel at how well Manny is put together, particular
attention is paid to his gait and he is quite honestly the most
handsome little devil anyone’s ever seen! And let me say with
the utmost love from my heart, he is a devil!!! I have never met
a dog with SO much personality, he is extremely playful and
likes to tease but remains obedient to me when necessary. He
seems to know just how far he can push before he gets a time
out! A clever boy and very MANIPULATIVE!!!! BEWARE!!!! I am
still to this day lured in by the false sense of serenity in the
pools of his sad looking brown eyes!!! LOL!! He gets me every
time!!! Manny is such a sweet, good natured and affectionate lad
Sharon, I could not have imagined Copperleigh pairing me with a
more suitable match than Manny…we have grown very, very close
over the past 3 years and he has earned an irreplaceable spot in
my heart. I have been strongly considering coming back to you
for a playmate!!! Thank you so much for everything, cant wait to
see your new website! Speak soon and best wishes. Manny & Brin
🙂 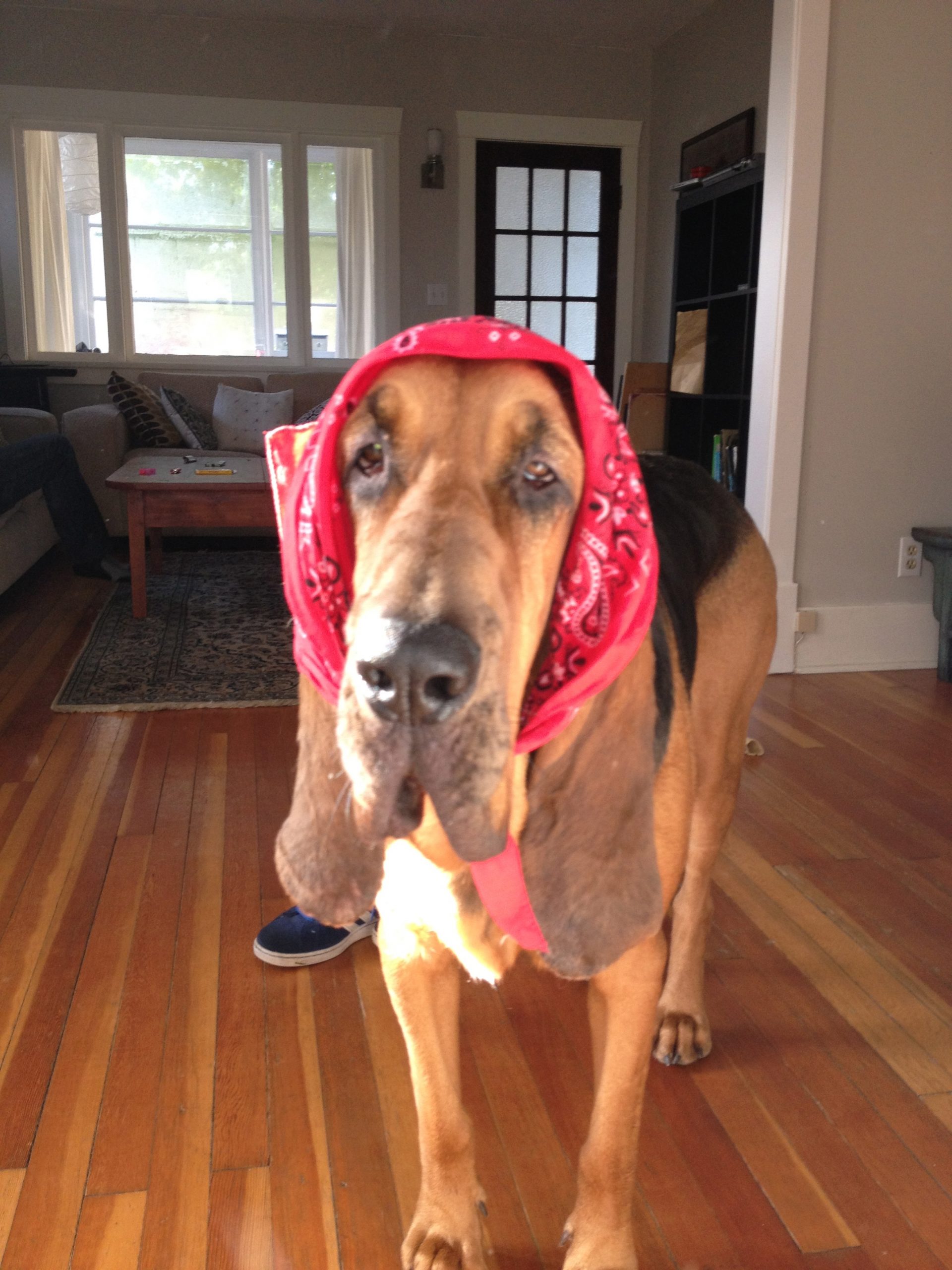 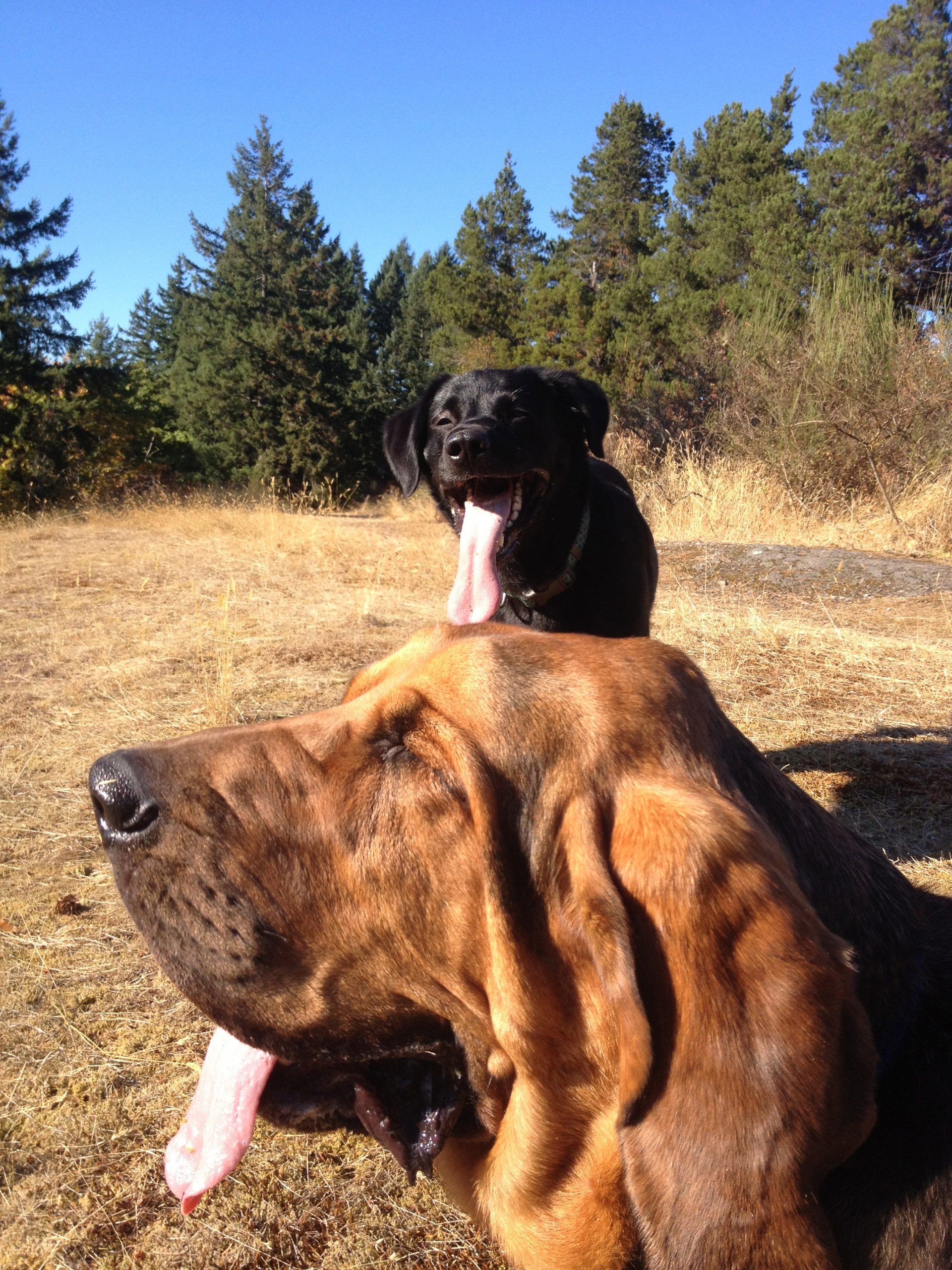 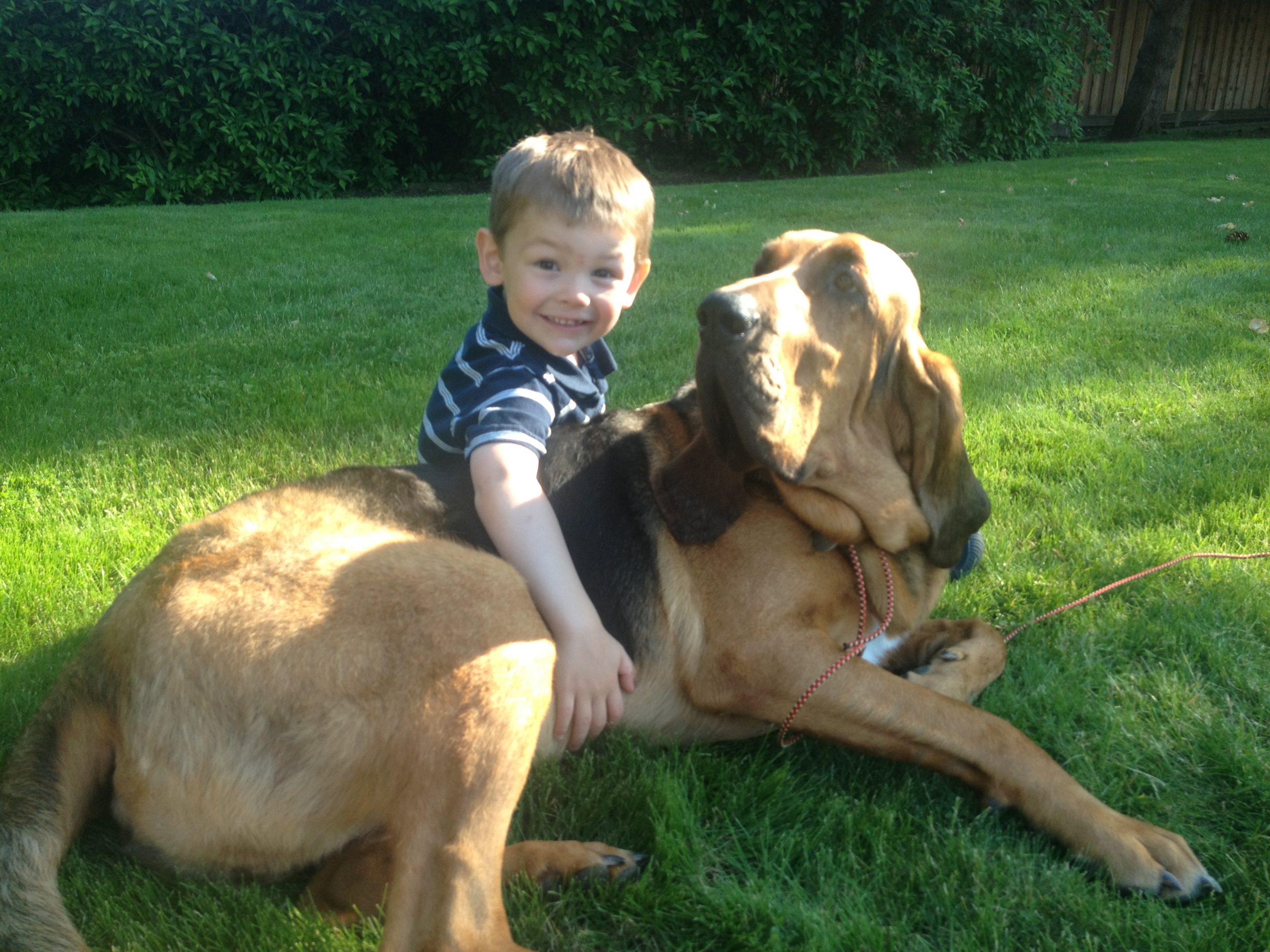 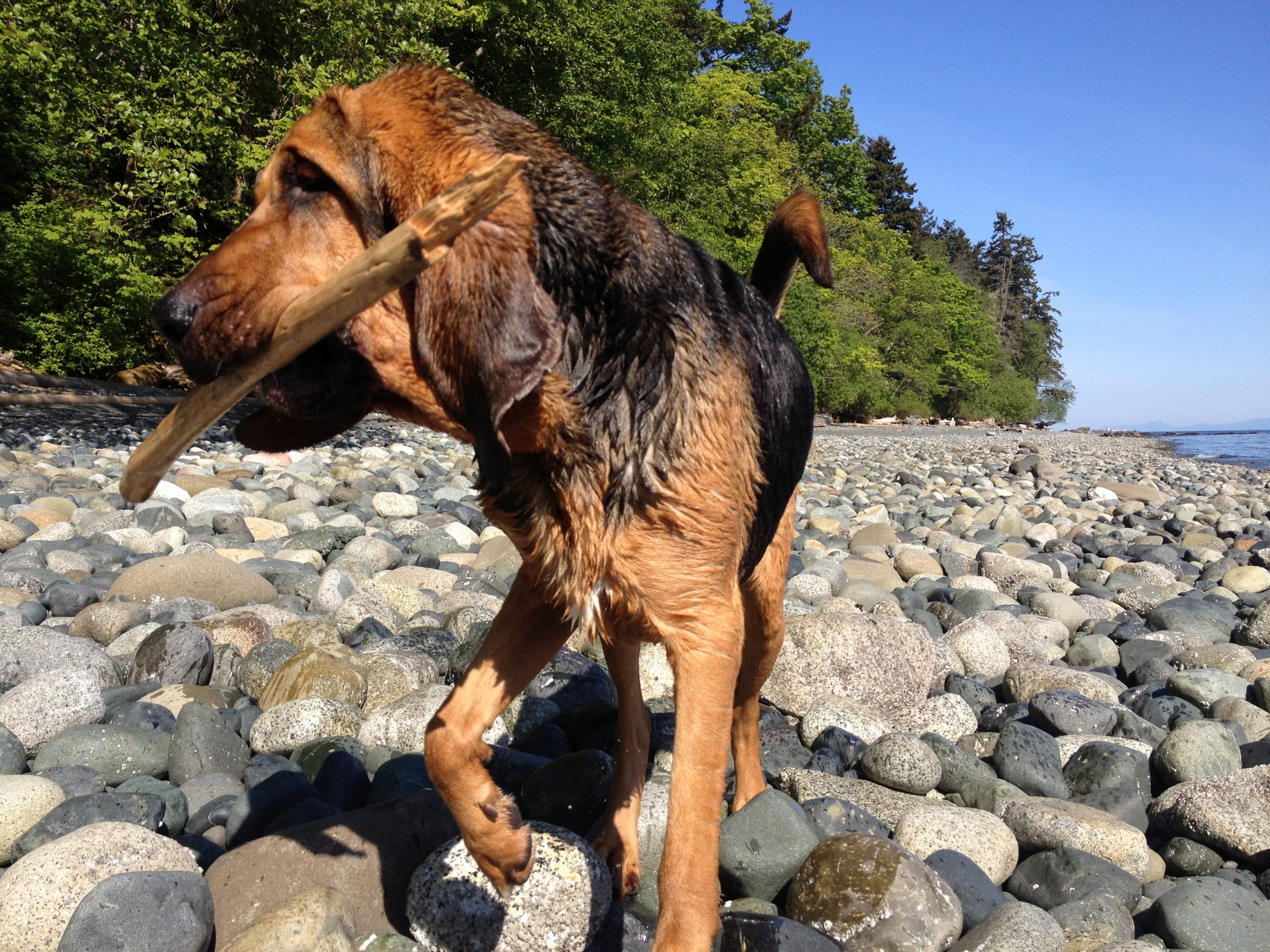 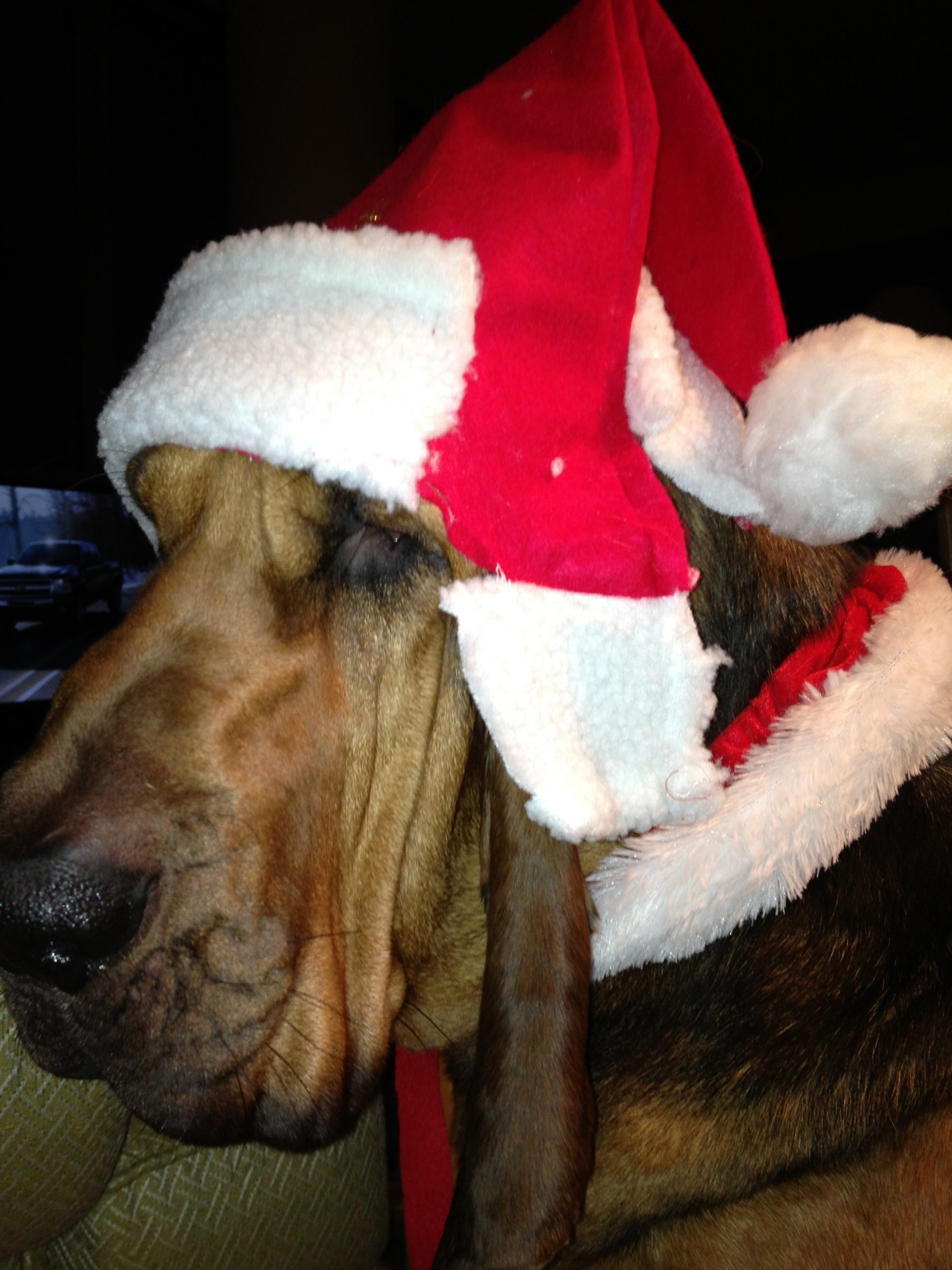 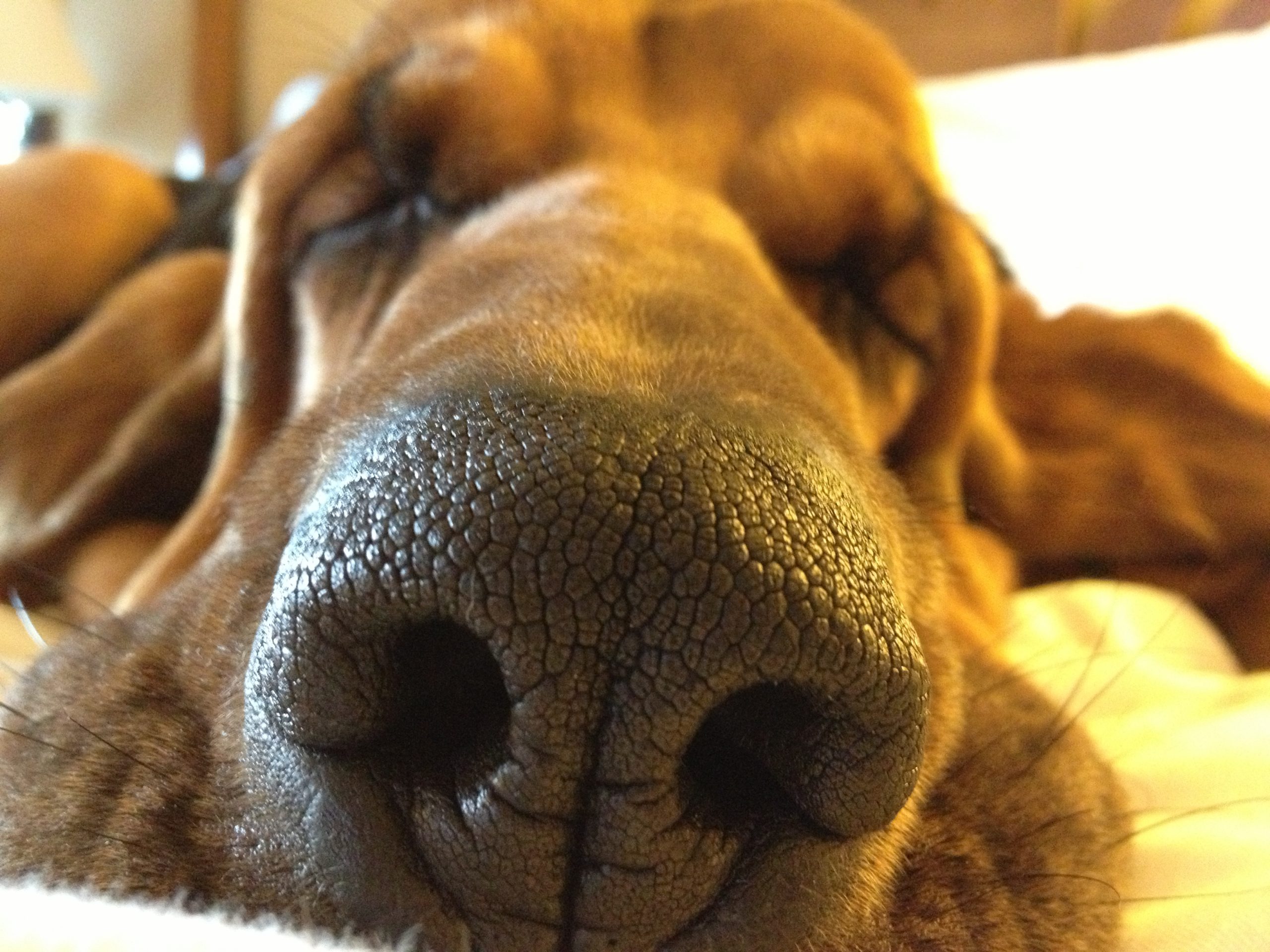 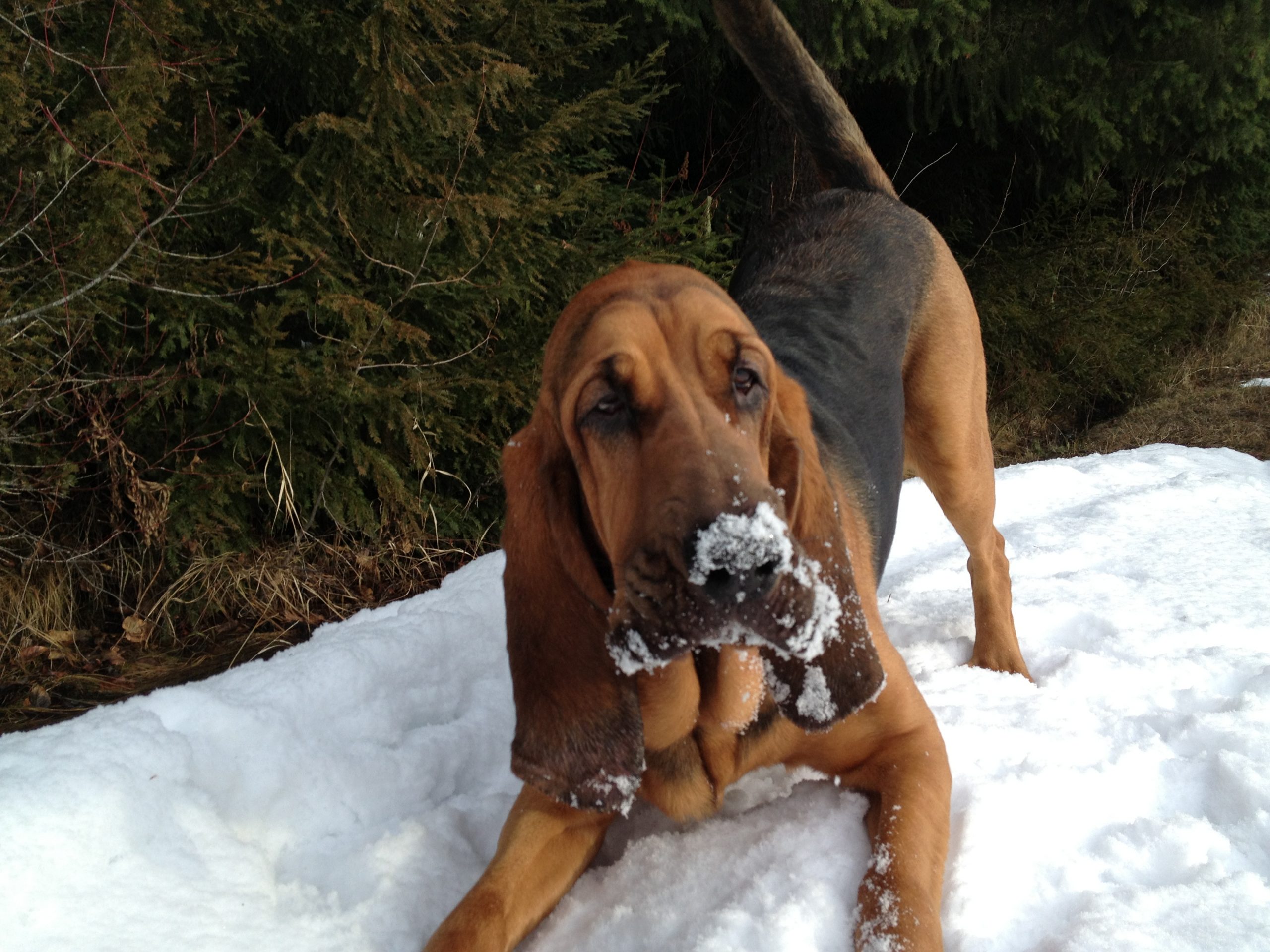 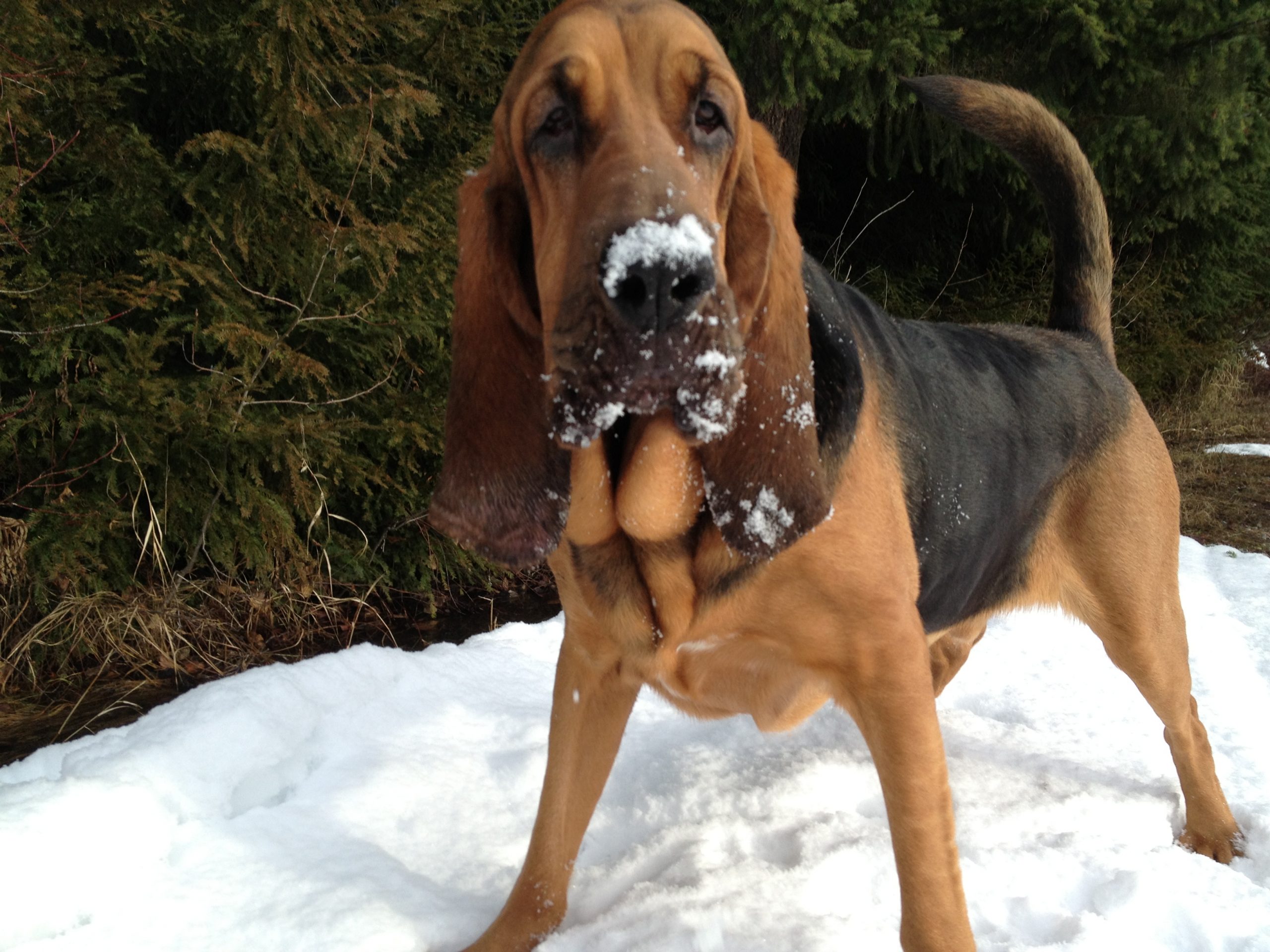 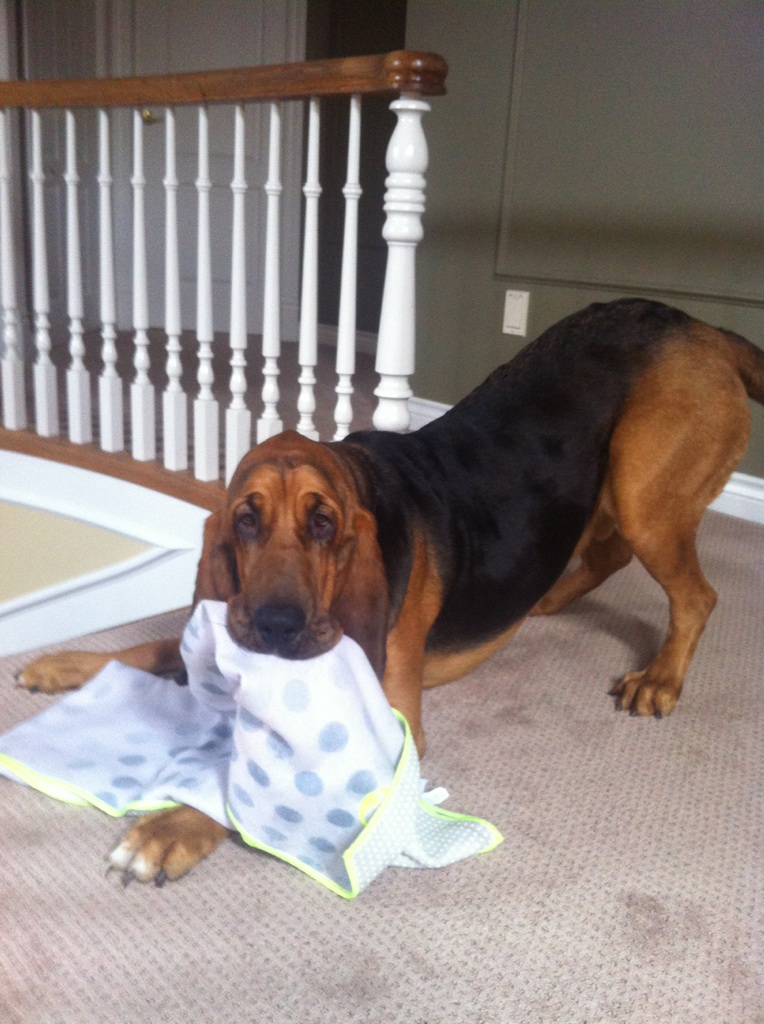 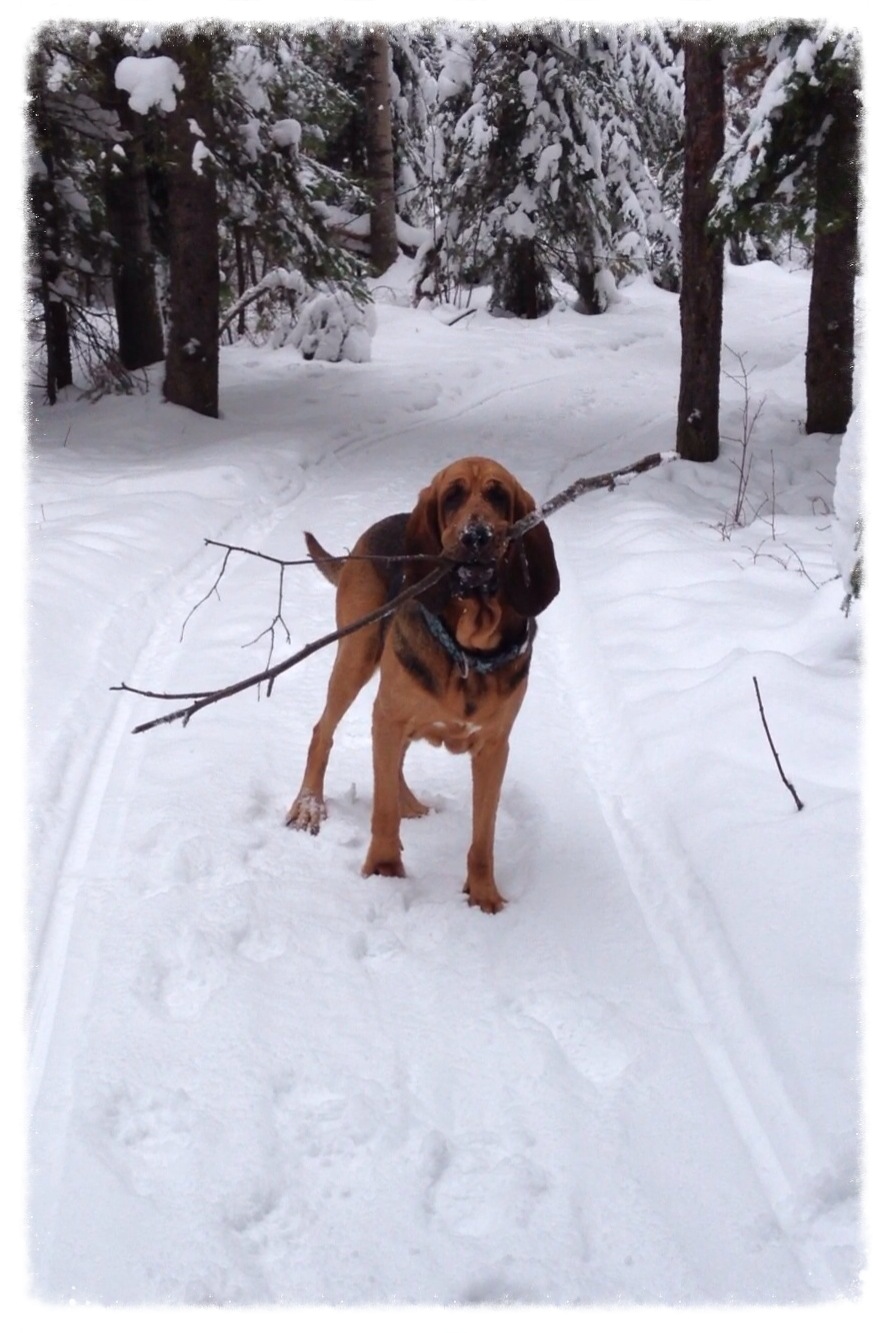 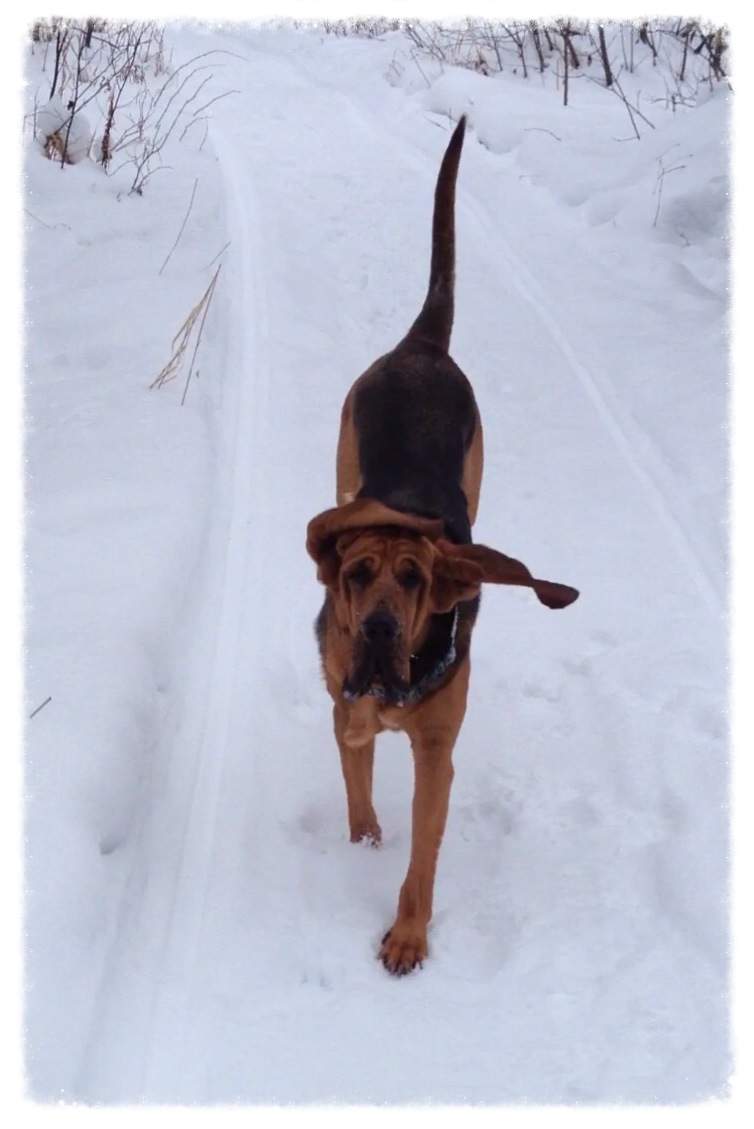 “My
excellent trailing bloodhound, ‘Reasie’, kennel name ‘Reasonable Suspicion.’ –
Her name is due to that fact that my husband and I are Reserve Deputies for
Sumner County Sheriff’s Department and Emergency Management of Tennessee. Our
hounds are used for finding lost children, Alzheimer’s patients, various
criminal cases and HRD.

Three
years ago, our previous bloodhound, ‘Missy’, short for ‘Admissible Evidence’,
died at the advanced age of 12 years. I was devastated. I thought I would never
find another bloodhound as good at mantrailing and as my constant companion. As
a puppy she had broken her leg, required surgery and kept separated from her
kennel mates. I spent many hours in her kennel holding her in my lap and
stroking her with love. We created such a strong and lasting bond. My husband,
Tim, knew that I was crushed and thought if I quickly did not find another
puppy, I would never heal.

Tim
found an ad in the American Bloodhound Club bulletin and called Canada of all
places. He spoke with a wonderful woman by the name of Sharon Danforth and got
more information about an upcoming litter. He discovered that ‘Reasie’s’
bloodlines would be American, Canadian, UK and Czech. He knew that I had always
wanted a black and tan hound with UK bloodlines. So with a lot of encouragement,
I spoke with Sharon. Sharon described the litter and I indicated what kind of a
hound I was looking for. She sent numerous pictures of the litter since the
puppies were on the ground. I immediately fell in love with a couple of the
puppies and asked Sharon to make the best match. Arrangements were made for us
to go to Toronto to pick up our new black and tan female puppy.

Returning to Detroit, our son’s home and a layover for us, and the entire family
was totally mesmerized by ‘Reasie’ who was 9 weeks old. She was frisky, gentle
yet fearless, and very inquisitive. Our son had a German Shorthaired Pointer who
‘Reasie’ decided was just her size to take on. What a hoot watching her play
with a 65 pound dog. We even had a very small harness with us so ‘Reasie’ ran
her first trails in Detroit on our grandchildren.

We gave
‘Reasie’ a week to settle in with us and our two other bloodhounds. We started
running puppy trails. By nine months she was mission ready. To prove the point
to our friends, the doubting Thomas’s, a test trail was set out. This trail was
a 24+ hr old car trail, windows up, 1+miles through our downtown, urban setting,
10 turns, and a double blind. A double blind means neither I nor my back up had
any knowledge where the trail went nor the end of the trail. ‘Reasie’ did a
fantastic job missing only 1 turn but picking up the trail at the next corner.
This trail can be viewed on ‘YouTube’.

After
mastering trailing, ‘Reasie’ was started on water HRD. (Human Remains Dog). It
took some time getting a consistent final response. She loves the water and
truly enjoys playing in the lake after training is over. To her, the trails and
HRD are just games. She loves it!!

Another
attribute of ‘Reasie’s’ is her playful and loving personality. She is definitely
a lap dog, especially loves kids and is so gentle with them. When running a
trail on a child you see a change in ‘Reasie’s’ body language. She totally
shakes until she makes her find.

Can’t
believe the ball drive that she has. When we throw a ball into our pool she
jumps in to retrieve it bringing it back for another throw. I give up long
before she does.

Her
next skill we are entertaining is to institute bringing her into the school
classroom and have the children read their books to her. It is proven that
children feel slight intimidation when reading to their teacher or another
adult, but a dog does not judge. The kids love it plus it is good for the hound
as gaining more confidence in new places and new noises.

We love
‘Reasie,’ her kennel mates love her and everyone she meets love her. Her
temperament is only secondary to her physical being. ” 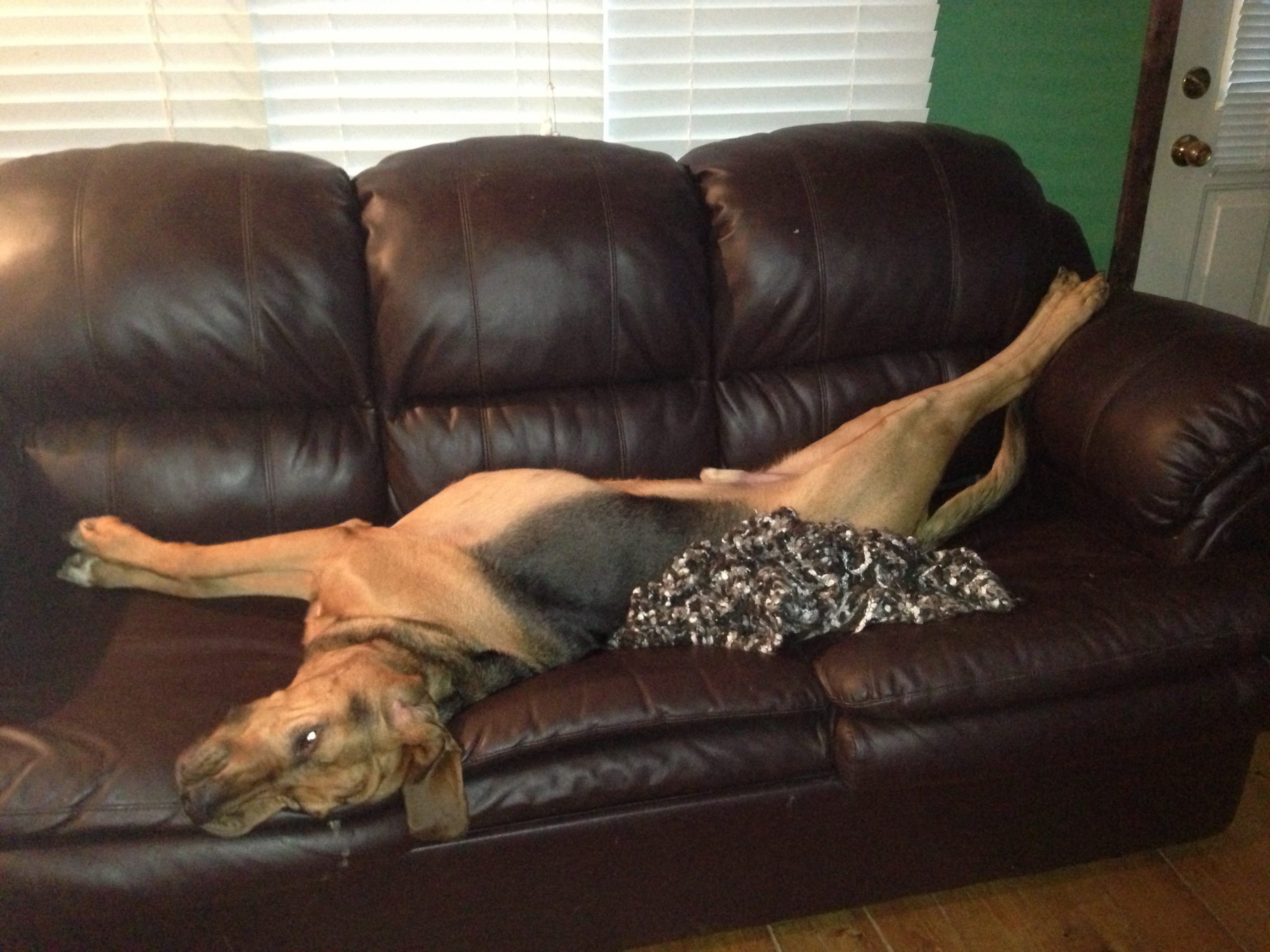 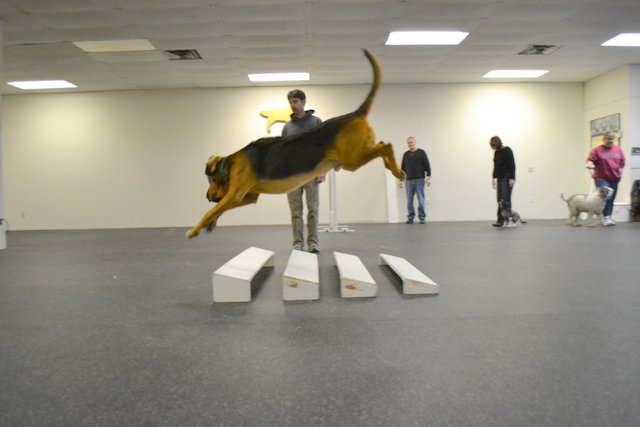 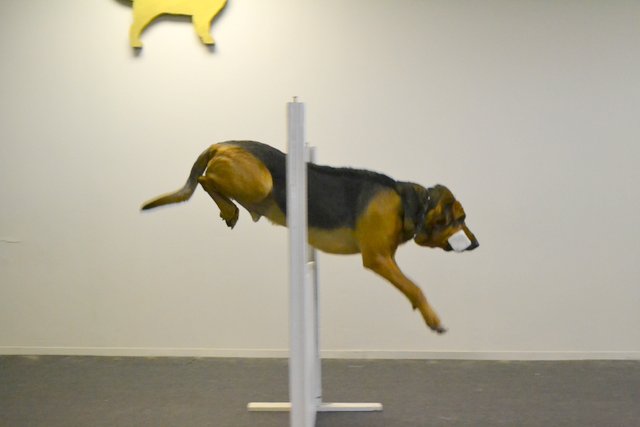